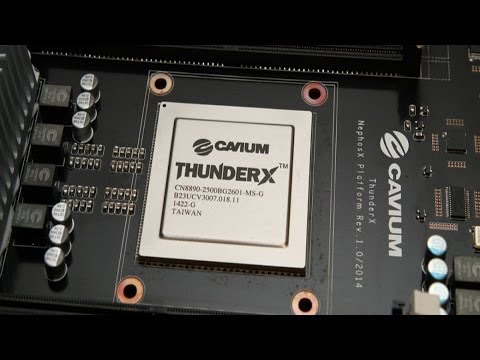 Cavium announced that the ThunderX chips are now available, including an industry first — a 48-core ARMv8 processor.

Rishi Chugh, Director, Product Marketing in the Data Center Processor Group at Cavium, told ServerWatch that all four families within ThunderX are enabled with a 48-core SKU.

“In all of them the dual-socket configuration for a 96-core sever will mandate both the socket SKUs to be a 48-core part,” Chugh said.

In a dual-socket deployment, the ThunderX platform can support up to 1 TB of DDR4 server memory running at up to 2400MHz. The dual-socket server configuration also benefits from Cavium’s Coherent Processor Interconnect (CCPI) technology, making a a dual-socket system fully cache coherent.

Cavium’s MontaVista software division worked on optimizing its Linux distribution for the new ThunderX SoC. Chugh also noted that Cavium’s other distribution partners, including Canonical and Red Hat, have been working on enabling Linux on ThunderX.

The 1U ThunderX 1K server reference architecture is a single-socket configuration for the ThunderX SoCs.

“ThunderX is our flagship ARMv8 multi-core processor family with the highest core counts and the most comprehensive set of I/O and accelerators in the market,” Gopal Hegde, VP/GM of Data Center Processor Group at Cavium, said in a statement. “ThunderX is a disruptive technology that enables our customers to deliver highly integrated, high performance, best-in-class platforms.”